Review of ‘The Original Australians: Story of the Aboriginal People’ by Josephine Flood 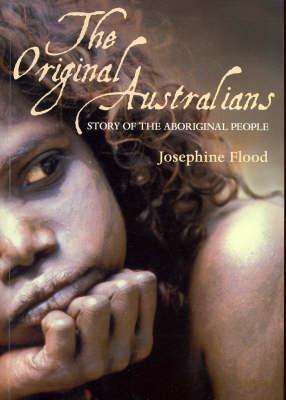 The Original Australians: Story of the Aboriginal People by Josephine Flood.

School of Philosophical and Historical Inquiry, Building A14, University of Sydney NSW 2006, Australia

‘My mission is to present an accurate, objective, informative account of this continent’s first inhabitants’ (p.x). Jo Flood asked family and friends for lists of questions that first-time visitors to Australia would want to ask, winnowed here to 21. They range from ‘Where did Aboriginal people come from?’ to ‘What do they want [now]?’. So this book is an attempt at an overview for the general public. The structure is interesting. ‘Aboriginal society is revealed … as it was gradually discovered by the outside world’ (p.xi). So the first four chapters outline the history from early seventeenth century to early twentieth century, then backwards from first contact to 50,000 BP, returning for the final two chapters to the history of the last century. The juncture between the last two sections is abrupt. Each chapter has a couple of boxes on particular topics (e.g. ‘a lack of coconut trees’, fire-making, grave-robbing), there are excellent colour illustrations and useful and comprehensive endnotes. The first chapter on ‘Exploration: European Discovery of Australia’ establishes several of the approaches and attitudes which the book maintains throughout. One is that Aboriginal society was profoundly and proudly ‘one of the most conservative on earth’ (p.8). Whether talking about agriculture, law or art, this theme is regularly reiterated (e.g. pp.24, 133, 264). Second is a good-hearted attempt to see both sides of any situation. So in relation to European occupation, and in contrast to any Aboriginal viewpoint, Flood says that Cook’s claim to 3.8 million km  was not illegal in terms of international law as then understood and, further, that there could be no treaties because of the localised and consensual nature of Aboriginal societies. The third aspect of Flood’s approach is to pile on details beyond what seems to be necessary. Thus, in relation to ‘cultivation’ (agriculture, husbandry) the flat statement that there was ‘no sign’ (p.20) of it is followed by a wide-ranging account of practices which others have interpreted very differently. The next three chapters take the story through many conflicts to c.1920. Generally the overview is thorough, but there are areas of surprise and occasional disquiet. Chapter 2, for instance, continues to claim that Tasmanians had ‘the basic Aboriginal toolkit, the irreducible minimum’ (p.63), while G.A. Robinson invented most of the accounts of Aboriginal women being brutally treated by sealers in order to maintain his position and authority over the Aboriginal population. One constant theme is that diseases were a far greater cause of destruction than massacres, a view which is almost certainly correct. In addition, several well-known massacres are firmly dismissed as inventions, a view which will not endear her to the Aboriginal communities who believe in them. Australian Museum anthropologists may be surprised to know that their ‘avowed policy’ is to give primacy to Aboriginal voices even when their stories are ‘factually incorrect’ (p.114). The source of this statement is an article in Quadrant

Archaeology of the Dreamtime

, with some up-to-date touches such as H. floresiensis, though she is suspicious of their association with stone tools. A close reading of Chapter 6 left me confused. On p.174 Aboriginal Y-chromosome lineage is ‘the oldest lineage outside Africa’ whereas there is ‘high diversity’ (p.179) in Aboriginal womens’ mtDNA, a scenario which suggests a very unusual migration pattern. In relation to megafaunal extinctions, hunting and burning are the total story, with ‘a widespread extinction event about 46 kya’ (p.189); the much later site of Cuddie Springs is dubious for several reasons, although ‘it is possible that some megafauna lasted longer’ (p.190).

Original article can be found here

Field and Wroe’s extensive discussions of the problem are not mentioned. In the Holocene a very small founding group of dingoes (a single female on a log?) were introduced. They ‘closely resemble the Asian pariah dogs’ (p.196), although dingoes are also ‘much closer to wolves than dogs’ (Plate 22, caption). In sum, these chapters give an impression of the prehistory, but have not been well thought through. The last two chapters, ‘Assimilation’ and ‘Resilience’, are a wide-ranging, episodic, chronologically-based history, largely of governmental policy and practice in relation to Aborigines. They are interesting and provocative and seem a useful short account: I am less competent to judge their accuracy. Some highlights:

The introduction of equal wages to the pastoral industry was a disaster, since it moved many communities in the north from work to welfare.

The Stolen Generation report (Human Rights and Equal Opportunities Commission 1997) is completely one-sided and biased (p.229), having taken almost no evidence from the policy’s administrators.

Most ‘urban and regional’ Aborigines are not much interested in land rights.

Flood has not been attending recent AAA annual general meetings. Finally, to return to its aim, I

recommend this book to first-time visitors. More will be interested in the European, especially the recent, period, and Flood is clearer and more understandable about this than about the archaeology. It’s not an easy read, but serious-minded visitors won’t be put off. Besides, as Flood says, there isn’t much else.

Archaeology of the Dreamtime: The Story of Prehistoric Australia and its People

Bringing them Home: Report of the National Inquiry into the Separation of Aboriginal and Torres Strait Islander Children from their Families